Well it's been some time since my last post. Nothing too drastic has happened in the world of modelling (as far as my fleet is concerned), However I thought I'd share the three most recent locomotives in my roster. 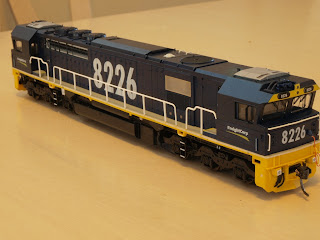 On Track Models 8226 - Been looking forward to this since I ordered it at Liverpool last year. I'm sure many people have been waiting for an 82 class, I know I have! TrainOrama teased us a few years ago saying they would produce one, but that must have fallen through the cracks at some stage.
Although I haven't run it yet, I must say the model looks fantastic. Detail looks great and the finish is fantastic. Interesting how On Track went for a Mashima motor instead of the 'normal' practice of using ones from the factory. I guess it guarantees spares in the future, and the quality of them is great.
I plan to make this beast a 'flag-ship' if you like; first of my locos to have sound and I'm going to weather it to the best of my abilities. 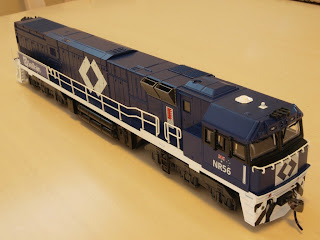 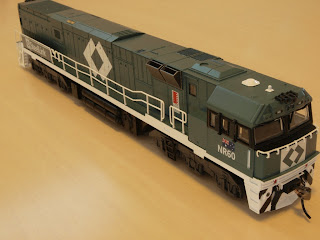 Two NR class locos, NR56 and NR60. I bought these from Epping [Thornleigh] and Liverpool for $175 each. Not bas considering their RRP is $275, however they do lack a lot of the finer details we have come to expect in more recent times. With Auscision doing the C43/44ACi, there may be a market for some 'spare parts' compatible with the NR?

I took these photos with my Dad's DSLR camera, after some difficulty I eventually worked out the way to take better photos with it. The lighting needs improvement but overall they are better than what I have done in the past.

I have also been working on some more Berg's HUB cars. I now have all the cars to make up a 6 car set, however only 3 are complete (PFH, RBH, FH). one is painted but not decalled (RFH), one is painted but not assembled (BH) and the last is still in pieces (HFH). I am planning on installing lighting into them, and am awaiting parts for this.

Until next time!
Posted by bigdirtyfreighttrains at 17:51