I bought 2 NPRY wagons during AR Kits March Madness sale (great idea!) and I set about trying to make them more accurate to prototype.At this stage I have started on one, I added an etched brass mesh deck from the Keiran Ryan Models kit (KRM-101) to replace the original plastic one; I think the difference speaks for itself, much better.
As for the brass ladders, I struggled to solder them in place, and upon close inspection the only major difference between these and the original plastics was the rungs are slightly thicker on the plastic, something which for the sake of long and frustrating soldering time, I will live with happily. 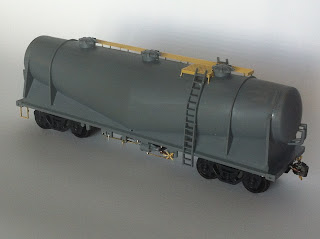 This photo shows the roof walkway and some of the added detail to the underframe. I replaced the plastic spider wheels with the brass from the KRM kit, and discarded the plastic wheel as the prototype photos I was using did not have these equipped. 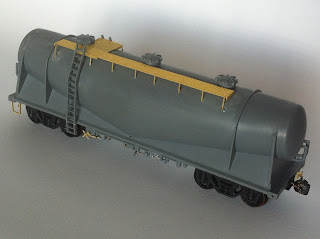 From the other side, this shows the mesh deck quite nicely. It does make a substantial difference to the appearance. 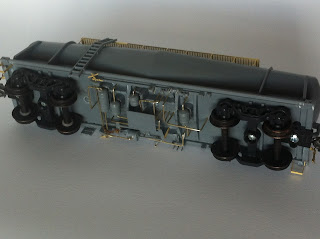 Here is the underframe, I roughly followed what I could see from prototype photos, however I just wanted to give the impression that there is a lot of piping down there. I am satisfied with the view from the side. I also glued a piece of flat lead sheeting to the top side of the underframe, and glued it in place instead of using the included screws.

I am hoping to do a bit of painting this week, and I will photograph the progress for those interested.

Only problem is that I have about 5 other NPRY's and will have to look at updating them to the same standard at some stage.